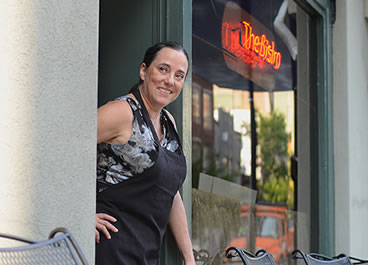 The Bistro was originally opened in 1980 in its current location on Gay Street in downtown Knoxville, TN. Martha Boggs—a Ducktown, TN native and graduate of the University of Tennessee—began managing The Bistro at the Bijou in 1993. In 2009 she became owner. The restaurant quickly gained a reputation for providing fresh, made-from-scratch meals in a quaint, urban setting. In the 90s Martha started to grow a variety many of vegetables on her small farm and began to incorporate the traditional, seasonal offerings—like okra, tomatoes, and eggplants—into her dishes. Nearly two decades later, the "farm to table" movement went mainstream. She creates two seasonal menus a year focusing on regionally-sourced cuisine prepared in simple, traditional ways, but also gets creative with her daily chalkboard specials.

Join us six days a week for delightful culinary creations served for lunch and dinner, as well as brunch on Saturdays. We feature daily specials and our menu includes dishes that cater to everyone from vegetarians to the health-conscious. And if you’re simply craving a delectable meal in a cozy bistro setting, you’ll find we’re serving up the best in sandwiches, burgers, comfort food, steaks, pasta, and seafood! Click on the menu tab for our daily menu and a monthly calendar of specials, and see what’s in store for entertainment on our jazz calendar.

The Bistro at the Bijou Restaurant is located in one the most historic buildings in downtown Knoxville. As the fourth oldest building in Knoxville, it originally was built as a private home for Thomas Humes who unfortunately died of a skin ailment before the construction was completed. His widow opened the house as a hotel and tavern. It was the center of social activity for the community and was known as the grandest hotel in the South.

The lovely piece of artwork below has been a focal point in the Bijou Theatre building for as long as anyone can remember. Hanging above the bar at the Bistro, the lady has been affectionately nicknamed Ms. Lil. She was painted in the late 19th century by James Patten, an artist of indeterminate origin, but with excellent taste in women. 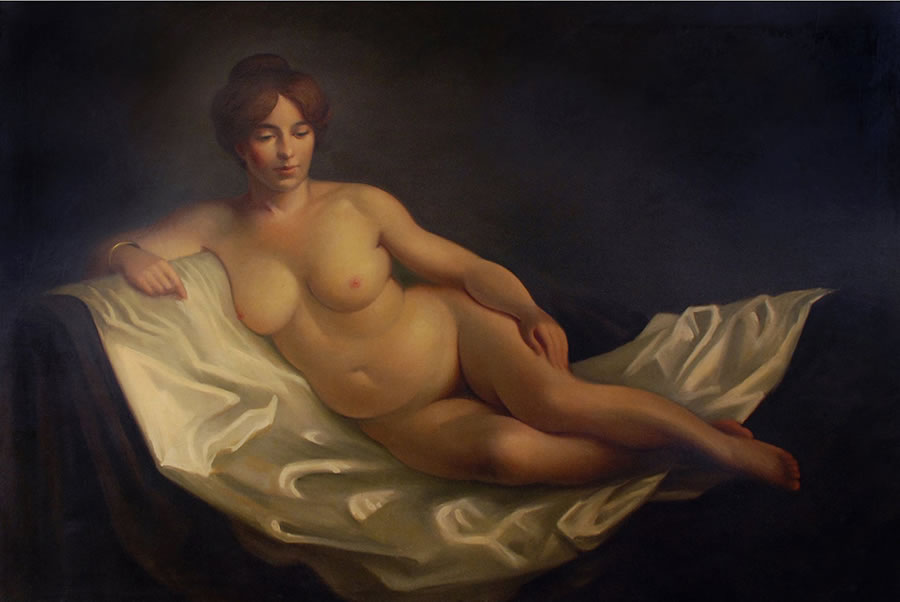 In addition to being housed in Knoxville’s fourth oldest building, next door's Bijou Theatre has an atmosphere that’s perfect for live music and the performing arts. Many performers and music fans consider the Bijou the best-sounding room in Knoxville, and with a capacity of just over 700, every seat in the house is a great one. Of course, you can always enjoy live jazz on Monday, Friday, and Saturday evenings at your very own Bistro at the Bijou.

This Renaissance style building was originally built with three stories, using state-of-the-art technology circa 1820. It also implemented a basement which housed the root cellars, coal bins, and supplies necessary to sustain what was then a frontier town hotel. In a massive public-works project, the city of Knoxville decided to level out the hilly sixteen block downtown area. The ridge where the hotel sat was lowered and the hill at the 100 block of Gay Street was raised, turning the hotel into a four story building. The former basement opened onto the sidewalk (now the Bistro) and a balcony was added to the original front door. It was from this balcony that Andrew Johnson addressed the city of Knoxville in his vice-presidential campaign. Other presidents who were guests at the hotel include: Andrew Jackson, Rutherford B. Hayes, James K. Polk, and Ulysses S. Grant. President Grant, however, stayed at the hotel before he was president.

During the Civil War, the Bijou was occupied by Union forces from 1863 until well after reconstruction began. Its primary use was as a hospital. It was here that General William P. Sanders was brought after being wounded during a skirmish on Kingston Pike. He died in the bridal suite of the hotel on November 18, 1863. In this time of war, the Union did not want their troops to know of the General’s death; he was secretly buried in the graveyard on Market Street, at midnight, two days after his death. It is General William P. Sanders’ ghost whom is believed to be the wandering spirit on the premises.

In 1895 the hotel was sold and became known as the Lamar House, undergoing a major renovation in which most of the hotel was torn down and a theatre was put in its place. The Bijou Theatre opened on March 8, 1909, with George M. Cohan’s Broadway hit, Little Johnny Jones, which introduced the songs, “Give My Regards to Broadway,” and, “Yankee Doodle Boy.” Throughout its heyday, the theatre had performances by various vaudeville acts, including the Marx Brothers, and legitimate theatre starring Ethel Barrymore and Tullulah Bankhead. After the advent of film, the theatre fell on hard times and degenerated into an X-rated movie house in the 1950s. In 1975, she was rescued from the wrecking ball by Knoxville Heritage, a local preservation society, and has since been renovated. Presently, the theater hosts mainly musicians, community theatre, and the Knoxville Chamber Orchestra.

"These 15 restaurants are some of the best in the state, but they go a little further than that – they define our state as a whole. Each and every one of them attributes something to the glistening gem Tennessee is to American food culture." ► Read the entire article.
Meghan O'Brien, OnlyInYourState.com.

"Many people consider it the best brunch in the city and I can tell you that it is very good." ► Read the entire article.
KnoxvilleUrbanGuy, Inside of Knoxville.

"Serving as one of Knoxville's most historic and laid-back hangouts, the Bistro continues to provide guests with a steady, healthy menu." ► Read the entire article.
—Hannah Zechman, UT Daily Beacon.

"The Bistro—one of my favorite restaurants for lunch, happy hour, dinner and music—is an institution. Housed in the fourth oldest building in Knoxville, the Bistro is quaint and charming, featuring exposed brick walls and a giant painting of a nude woman known as 'Miss Lil.'" ► Read the entire article.
—Cynthia Moxley, The Blue Streak.

"The Bistro at the Bijou is a Knoxville institution. Located in the fourth oldest building in the city, built around 1820 and originally one of the finest hotels in the South, the site has seen four US Presidents pass through its doors – Ulysses S.Grant, Rutherford Hayes, James Polk, and Andrew Jackson." ► Read the entire article.
—Matthew Keyte, The Culture Trip

1854 — The hotel is renamed Coleman House

1895 — Major renovations begin on the Bijou

1909 — The Bijou Theatre opens to huge crowds of people

1975 — The building is saved from demolition by Knox Heritage

1980 — Doors open to the The Bistro at the Bijou restaurant

1993 — Martha Boggs purchases The Bistro at the Bijou